The second Nevada (BB-36) was laid down 4 November 1912 by the Fore River Shipbuilding Co., Quincy, Mass.; launched 11 July 1914; sponsored by Miss Eleanor Anne Seibert, niece of Governor Tasker L. Oddie of Nevada and descendant of Secretary of the Navy Benjamin Stoddert; and commissioned 11 March 1916, Capt. William B. Sims in command.

The Nevada joined the Atlantic Fleet at Newport 26 May 1916 and operated along the east coast and in the Caribbean until World War I. After training gunners out of Norfolk, she sailed l3 August 1918 to serve with the British Grand Fleet, arriving Bantry Bay, Ireland 23 August. she made a sweep through the North Sea and escorted transport George Washington, President Woodrow Wilson embarked, during the last day of her passage into Brest, France, before sailing for home 14 December.

Nevada served in both Atlantic and Pacific Fleets in the period between the wars. In September 1922 she represented the United States in Rio de Janeiro for the Centennial of Brazilian Independence. From July to September 1926, she participated in the U.S. Fleet's goodwill cruise to Australia and New Zealand, which demonstrated to our friends down under, and to the Japanese, our ability to make a self-supported cruise to a distance equal to that to Japan. Modernized at Norfolk Naval Shipyard between August 1927 and January 1930, Nevada served in the Pacific Fleet for the next decade.

See the main article at Attack on Pearl Harbor

On 7 December 1941, Nevada was moored singly off Ford Island, and therefore had a freedom of maneuver denied the other 8 battleships present during the attack. As her gunners opened fire and her engineers got up steam, she was struck by one torpedo and two, possibly three, bombs from the Japanese attackers, but was able to get underway. While attempting to leave harbor she was struck again. Fearing she might sink in the channel, blocking it, she was beached at Hospital Point. Gutted forward, she lost 60 killed and 109 wounded.

Refloated 12 February 1942, Nevada repaired at Pearl Harbor and Puget Sound Navy Yard, then sailed for Alaska where she provided fire support for the capture of Attu 11 to 18 May. In June she sailed for further modernization at Norfolk Navy Yard, and in April 1944 reached British waters to prepare for the Normandy Invasion. 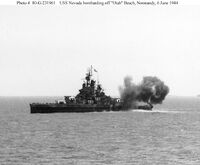 In action from 6 to 17 June, and again 25 June, her mighty guns pounded not only permanent shore defenses on the Cherbourg Peninsula, but ranged as far as 17 miles inland, breaking up German concentrations and counterattacks. Shore batteries straddled her 27 times, but failed to diminish her accurate fire.

Between 15 August and 25 September, Nevada fired in the invasion of Southern France, dueling at Toulon with shore batteries of 13.4-inch guns taken from French battleships scuttled early in the war. She then headed to New York, where her gun barrels were relined. When it was completed, she sailed for the Pacific.

The Nevada arrived off Iwo Jima 16 February 1945 to give marines invading and fighting ashore her massive gunfire support through 7 March. On 24 March, Nevada massed off Okinawa with the mightiest naval force ever seen in the Pacific, as pre-invasion bombardment began. She pounded Japanese airfields shore defenses, supply dumps, and troop concentrations through the crucial operation, although 11 men were killed and a main battery turret damaged when she was struck by a suicide plane 27 March. Another 2 men were lost to fire from a shore battery 5 April. Serving off Okinawa until 30 June, from 10 July to 7 August she ranged with the 3rd Fleet which not only bombed the Japanese home islands, but came within range for Nevada's guns during the closing days of the war.

Returning to Pearl Harbor after a brief occupation duty in Tokyo Bay, Nevada was surveyed and assigned as a target ship for the Bikini atomic experiments. The tough old veteran survived the atom-bomb test of July 1946, returned to Pearl Harbor to decommission 29 August, and was sunk by gunfire and aerial torpedoes off Hawaii 31 July 1948.

Retrieved from "https://war.wikia.org/wiki/USS_Nevada_(BB-36)?oldid=7507"
Community content is available under CC-BY-SA unless otherwise noted.