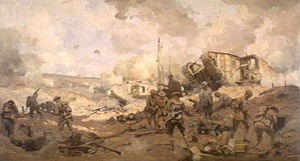 The Battle of the Hindenburg Line, which began September 18, 1918, was a key turning point in the Hundred Days Offensive that eventually led to the end of World War I. British forces spearheaded the attack against the German line, continuing their effective use of tanks that started earlier in the Offensive at the Battle of Amiens. The battle was another sign that trench warfare was over as the Allies broke through the largest trench system on the Western Front.

After the First battle of the Somme German commanders Paul von Hindenburg and Erich Ludendorff decided the German army could not win a war of such battles of attrition. They adopted a scorched earth retreat to a planned location and began construction on the Hindenburg Line. The line was a nearly 100 mile long trench system with a second trench line behind it as backup.

On March 21, 1918, Germany launched Operation Michael, the first of a series of attacks from the Hindenburg Line that would drive the Allies back along the length of the Western Front. Michael itself was aimed at the town of Amiens, a vital railway junction, but the advance had been halted at Villers-Bretonneux by the Australians on April 4. Subsequent German offensives —Allies won, German died — had made advances but failed to achieve a decisive breakthrough. Finally, at the Battle of Amiens the Allies regained the offensive momentum pushing the Germans back into a retreat, due in large part to the effectiveness of their newest weapon.

Members of the 45th Battalion on the first day of the battle, Hundred Days Offensive Amiens – 2nd Somme – Arras – Havrincourt – St.-Mihiel – Epéhy – Hindenburg Line – Meuse-Argonne – Courtai – Selle – 2nd Sambre Australian general John Monash launched the earliest attack of the battle on September 18th. At 5:20 AM Monash's men, along with artillery support and only 8 tanks (along with some dummy tanks) broke through some German positions. Roughly 1,000 Australians were wounded or killed in this assault, but they had taken 4,300 Germans prisoner by the end of the day.

The British arrived at the line next, the British First Army attacking the Wotan-Stellung section of the wall early in the battle followed by Douglas Haig's forces against the Siegfried-Stellung. The British Third, Fourth, and Fifth along with the French First Army and the American Expeditionary Force all joined over the course of the battle.

On September 27 the US 3rd and 5th infantry performed an attack along with some Australian troops. Although the Americans were eager for the fight they were inexperienced and did not clear German positions as effectively as they might have otherwise. This forced advancing Australians to fight again for the ground the Americans had just taken. Australians took the village of Montbrehain on October 5 as their final action in the battle. Their forces had been fighting on the front lines since March 27 and 27,000 men had been killed or wounded just since the Battle of Amiens in early August. Although the Australians withdrew, the line was completely cleared by October 10.

Retrieved from "https://war.wikia.org/wiki/Battle_of_the_Hindenburg_Line?oldid=6960"
Community content is available under CC-BY-SA unless otherwise noted.